A Message of thanks from Pat Lewis

On Friday 6th March 2020 it was my privilege to organise, along with Bill Carne, a Fun Quiz Night designed to raise much needed funds for the Racecourse Public Parks Trust.

I am pleased to report that we raised the sum of £775.

Only too often we forget to say thank you to the people who help to make such an event successful. I would like to make sure that this is not the case on this occasion by listing those who made such important contributions. I run the risk of missing someone out and I hope they will forgive me if this proves to be the case. However, I feel it important to show appreciation to the many people who helped to raise such a fantastic sum of money.

Thank you to Haverfordwest Cricket Club for allowing us the use of its facilities and to Mark Coneybeare fo his assistance. Thanks to Bill Carne, our resident Question Master and his wife Marilyn, who together provided such enjoyable entertainment.

£235 raised by the raffle speaks volumes for the high regard that the Racecourse is held in by those present. Thanks must go to Councillor Roy Thomas and his wife Shirley for their wonderful sales technique.

It is a credit to the Committee of the Racecourse Public Parks Trust that so many members contributed to the success of the evening. All three officers gave a generous donation along with Mrs Maureen Pratt, Cllr Chris Thomas, David Loosmore, Mike and Rosalyn Wort,

Mike Codd and Roy Thomas.  This example set had the effect of encouraging supporters such as Mrs Tina Jones, Chris Mckeen, Brian Griffiths, John and Susan Hayes, Mark Edwards and my son and daughter to give generously.

Jonathan Twigg, Barbara Morgan and Roy Whitfield all provided teams and this in turn, encouraged the Cricket Club, Soroptimists and the Haverfordwest Ladies Choir to join in the fun.

Finally, I would like to acknowledge the generosity of the winning team led by Lynne Hart and the Runners Up led by Tricia Thomas for donating their prizes to our cause.

Once again, thanks to one and all.

We are delighted to say that the 5, most recently donated, seats have finally been installed along the NorthWest of the Racecourse.

Our thanks to Shane Owens and his team for the work involved in removing the old seats, laying the concrete and fixing the new seats in place.

Weary walkers can now find somewhere to rest at regular intervals.  Many of the seats are ideal for watching some of the sporting activities taking place every week.

In aid of the upkeep of Haverfordwest Racecourse

To enter a team please call:

Please support this worthy cause

and help to maintain your Racecourse

We have now had 2 special acts of generosity displayed on the Racecourse this year.

The first, in September,  was provided by LOOK for a BOOK 📚 – Pembrokeshire.   Part of a growing National Scheme, they provide books for younger readers.

As their Facebook page says “To bring excitement back into reading. There will be books hidden around Pembrokeshire. If you find a book feel free to take, read, keep or re hide it for someone else.”

The second, for Christmas Day itself,  was a pile of Secret Santa presents left in the Shelter (AKA Bus stop).

A big thank-you to whoever organised these events.

We are very grateful to Sean, our friendly builder from Ruther Park for filling in the gap in the path from the road to the Racecourse at the beginning of the year.  As well as presenting a dangerous trip hazard, the gap also acted as a barrier to our older users trying to use a motorised wheelcair and wheeled walking frame.

Our thanks also to David (Dai) James for keeping the grass cut so well throughout the year.

Following the inital clearance by volunteers of the newly named “Memory Walk” in August it was decided to employ Dai to keep the pathways clear with a regular trim.

Early December saw the start of the major clearance of the brambles and shrubs which had, sadly, been allowed to encroach into the width of the outer ‘Horseshoe”.  It is hoped that the regular grass trimming by Dai will enable us to keep on top of this growth next year to prevent a recurrence of the intrusion. 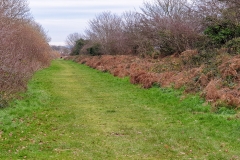 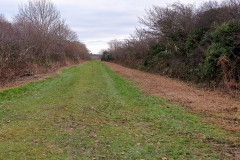 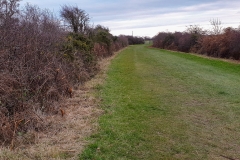 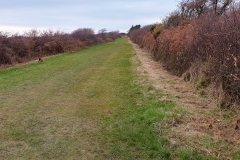 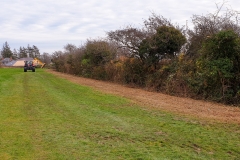 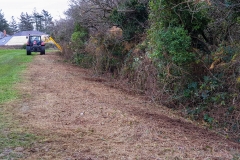 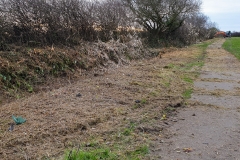 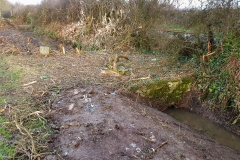 The final clearance for this year of the ditches at the Dale Road end of the Racecourse from the Cricket Club to the Park Corner Road side.

Just in case you haven’t noticed we now have our own Facebook page which is a good way to stay up-to-date with events on the Racecourse.

You can also use it as an easier way to share your thoughts, photos and news.

We’ll also be using it for occasional calls for volunteers to help when we have some specific tasks where we could use a hand.

On Sunday 4th August a group of hard working volunteers acheived an excellent start to the racecourse path clearing.

In 2 hours we generated 4 trailer loads to go to the tip and the ‘nature’ path on the South side is now much more passable. There is still work to do though (brambles don’t give up that easily) so we may be calling for more volunteers soon.

Our special thanks to the volunteers for their time and effort:

Are you willing to help clear the overgrown paths around your Racecourse?

Where? Meet in the Cricket Club Car Park

What do I need? Gardening gloves and eye protection are recommended. Also please bring any of the following: secateurs, small garden saws, loppers, trugs, wheelbarrows or builders sacks. If you have a trailer and are prepared to do a tip run that would be an added bonus.

Thank you from the Racecourse Committee

The Haverfordwest Public Parks Trust AGM will be held on Tuesday 21st May 2019.

It will be held at Haverfordwest Cricket Club, starting at 7.15pm.

Any users of the Haverfordwest Upper Racecourse are welcome to attend.

In aid of the upkeep of Haverfordwest Racecourse

To enter a team please call:

Please support this worthy cause

This site uses a few cookies: Find out more.